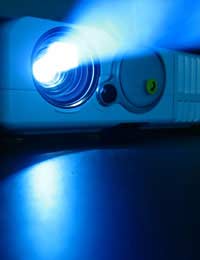 Most speakers at conferences these days will be used to using computer based audio and visual aids to their presentations. They will largely have moved to new technology from the overhead projectors (OHP), flipcharts and whiteboards, although they still have their place in certain situations.

Old Visual Aids Are Still in Use

Flipcharts in particular still survive because they are good at what they do and what they offer is tricky to replicate using new technology. It's not technically difficult to present a computer whiteboard that can do the same thing as a flipchart, it's more that there is no one way of doing it, no industry standard. So speakers have to know how to use the equipment that is in place in each conference venue that they use, and most simply can't be bothered.

Of course flipcharts can be ripped off the stand and pinned up around rooms, something that, if you want to replicate it in technology, means investing in new visual aids like a whiteboard with a digitiser and printer attached. Then when you want to keep what you have on the whiteboard, you print it off, and a few minutes later, there it is. But a flipchart can do that in seconds at a fraction of the cost – that's why they still survive. And you're still using a dull old pen on the whiteboard.

Overhead Projectors Have Their Place

In academic circles in particular the OHP still survives. This is often because the academics will have already made their slides and are reluctant to re-invent the wheel purely because technology has developed a different way of doing things.

There is also one thing that you can do with OHP slides that's not so easy with a laptop and a touchpad pointing device, and that's add to your standard presentation by writing on the charts with a marker pen on the fly. Again it can be done but if it's not easy and intuitive, people are less likely to adapt to new visual aids when there's a simple alternative already in place.

Technology Compatibility in the Conference Hall

For those that have adapted to new technology then there is a lot that can be done. Now that the worlds of computing, television and film are beginning to merge, interspersing graphics or bullet points with video, audio and other more stimulating imagery is becoming easy, not just possible.

Now that people are more comfortable with lugging laptops around and plugging them into various different audio-visual systems this has become less of a problem. Most conference systems will still have VGA inputs and won't expect speakers to have HDMI outlets on their laptops. It is worth encouraging speakers to bring their presentation and vital documentation on a USB memory stick or a CD/DVD just in case something happens to their laptop or they are unable to make it work in the conference hall.

The most important thing to do as a conference organiser is to ask speakers what audio and visual aids they will need in order to deliver their presentations. Do not make assumptions, and if they say there are bringing their laptop, ask them what operating systems it runs, what presenting software they are using, and what video output their laptop has. If you can't get answers, prepare for the worst.

And stress the importance of bringing the presentation on different media, as already discussed. This gives you that double security, in fact with broadband now available in most areas of the country you could ask them to email it to you as a safeguard. And make sure the flipchart and OHP are available just in case everything else breaks down.