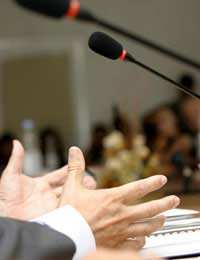 Public conferences are those where the essentially anyone can attend, rather than the audience being invited. There may be an admission fee, or it can be free, or a mixture of both, depending on the reason for the conference and the type of audience, but the main point is that anyone can go along.

Charging for a Conference

Whether or not a conference is to be charged for admission affects the way it's organised. The difference this makes to organising a private conference or meeting is that the major focus of activity in the run up to a conference that's charged for will be the marketing and advertising activity to attract attendees.

Who does that work depends on whether the company organising the conference are the main benefactors of it, or whether a professional conference organising company is doing that on behalf of someone else. There's no right or wrong here, it just depends on the relationship between them. A trade show, for example, might be run by a trade body that represents all the companies in that sector and they might use a professional event organising company to arrange it on their behalf.

A professional conference company will arrange the venue, the catering and other support functions. Then they may take on the marketing and advertising and the trade body might decide to do it themselves. It depends on the capability of the trade body and how good a job they feel they can do.

Many trade shows will actually advertise a fee for the conference. But they may waive it for people who can convince the organisers that they are bona fide business people who are involved in the particular trade, either as buyers, manufacturers, suppliers or journalists specialising in the trade. This means, of course, that the vast majority of the people attending the venue will not have paid.

But the reasoning here is not to make money out of the admission fee but to dissuade people who are not involved, but who have an interest in the subject matter, filling up the venue and getting in the way of the people who are there to do business. Computer trade shows in particular suffer from this and a public conference can't refuse to admit interested people, so making it expensive for them to attend keeps the majority away. This increases the value of the conference to the people that the conference holders want to attract in the future.

Many conferences are organised by public bodies like governments and civic bodies, and in that case there is less of a focus on advertising and marketing. Obviously the conferences need to be filled, otherwise there would be an outcry at the waste of public money. Some, particularly those that have been arranged to impart new information or training, will in fact charge a fee, usually to cover the cost of hiring the venue and any catering rather than to make a profit.

One aspect of publicly-funded conferences or meetings can be a different level of security at the venue. At an ordinary conference, for a trade body, perhaps, the security is more likely to be about preventing theft or perhaps controlling people who have over-indulge in free beverages. But if government figures are likely to be attending a public meeting or conference then there will be a focus on personal security and anti-terrorist initiatives, depending on the nature and level of the attendees.

This, along with many of the other aspects discussed here, may be the responsibility of the conference holder, the organiser, or the venue. If you are involved in organising a conference it's vital that these responsibilities are made crystal clear or the outset.