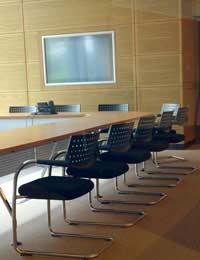 The promise of virtual conferencing has been with us since the early James Bond films. Delivering on that promise has taken longer than many people believed but over the past few years great strides have been taken that make holding a virtual conference a very good alternative to the real thing.

The real enabler for this change has been the emergence of broadband internet. In the past, video conferencing has been technically possible but difficult to set up and expensive, because of the large amounts of data bandwidth required to support digital video. This is many times the amount necessary to pass just audio signals.

Holding a video conference as opposed to a real one is now an option being driven by ecological concerns as well as cost. The cost to the planet, as well as the financial cost to companies, of hundreds of people travelling to one location to hear people speak on certain subjects is being talked about more openly now than ever before.

The virtual conference allows people to share the same experience without all that cost and damage. However, a virtual conference cannot provide the informal networking opportunities that a real one can and until that's possible, real world conferences are likely to continue.

Since the 1980s video conferencing technology has been available to allow a video conference to be held but it was really a way of joining two (sometimes more) meeting locations together. As well as the high-speed expensive data lines required, special equipment was needed at both ends of the link.

Now that broadband is ubiquitous and digital video compression developments have made it possible for anyone with a PC and a broadband connection to access video, the internet is blossoming with virtual conference products.

So although there's the opportunity for two-way dialogue between the various attendees there's no other interaction or shared work going on. These are often referred to as 'webinars'. The audio collaboration can be over ordinary telephone lines or across the internet, either will work.

More complex products allow the attendees to work together on shared electronic whiteboards and communicate using chat or instant messaging software while the conference is in progress. Many will also allow the conference to be recorded, another bonus as it means that people who couldn’t attend 'in person' can catch up in their own time later on.

Currently the only major missing element of the virtual conference vision seen in spy and science fiction films is that the participants can't all see each other. With a small number of participants this can be done but that, by definition, is really a meeting, not a conference.

This is really a practical issue. If pictures of all the attendees were put on a computer screen then very quickly there'd be no space to see any presentation or communication. Technology will come up with a solution to this one day, it's certain, and although the vision isn't completely realised, holding a virtual conference is a real possibility and a worthwhile alternative that has many benefits over a real one.